I've been doing quite a lot of A/B testing recently, using the in-built Google Play Developer console. Google's developer console is really good, and absolutely blows away what you get from Apple or Amazon in my opinion. It's a simple interface with lots of useful tools, but it's this A/B tester that I think is the absolute killer.

You can change icon, screenshots, video and text, and test it for each language. It'll then show half of users your test, and half the normal listing. 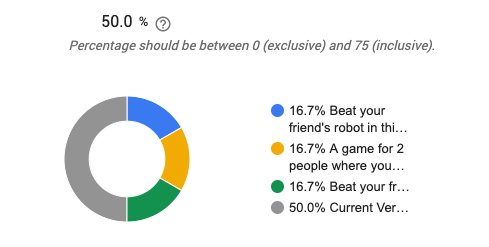 Then it'll show you the conversion rate, allowing you to see which option is the best for converting. Here's the results from me changing the "short description". I made an option that was worded differently (yellow), and one that was worded differently but with quite a lot more hyperbole (blue). The blue version text started with the words "Hilarious game!" which is what a lot of people say when they review the game.

The grey line above is the original option, and you can see that the blue version completely outperforms it. I suppose this should be no surprise that the words with the most hyperbole have performed the best. I'm not usually very good at talking up my games, but it looks like this is something I'll have to do if I want to get more people to take notice!

Battle your opponent bot & push them off the edge in this quick, 2-player game